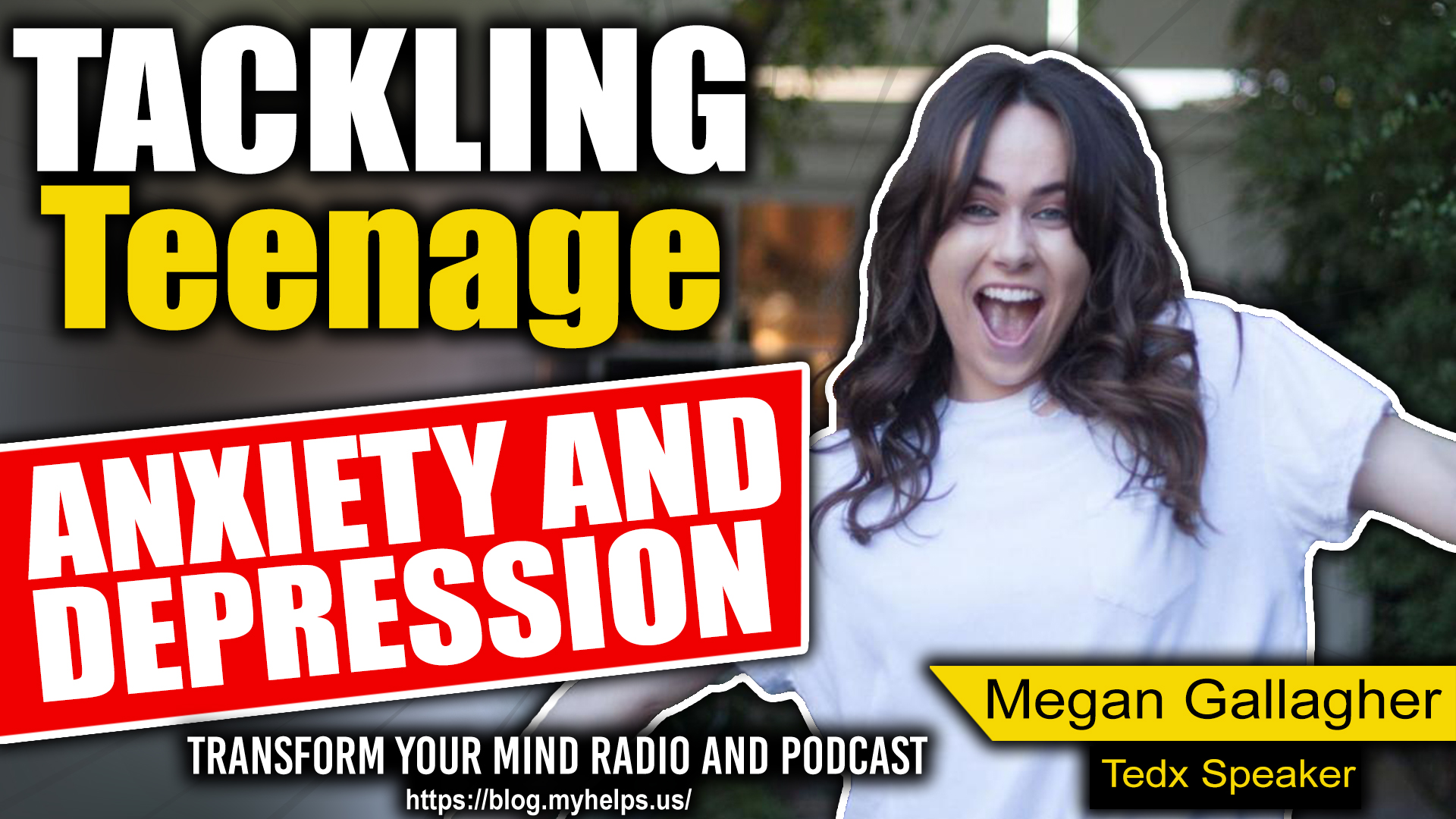 Anxiety, in teenagers and young adults is much more than a phase. It’s a real condition that can interfere with daily life, lead to, depression, and suicidal thoughts.

In this interview, I am speaking with Megan Gallagher, mental health advocate and Tedx speaker.

While growing up, Megan experienced chronic, anxiety, and panic attacks, as well as body image issues. Inspired by the lack of honest conversations among her peers/teachers about “real life topics”. After therapy and healing, she dove headfirst into making that change in the public school system! Gallagher currently speaks at middle schools and high schools about, mental health, self-care, following your dreams & mindfulness. She has spoken at over 500 schools and been featured in major media outlets like Forbes Magazine, Entrepreneur Magazine, The Today Show, OK! Magazine, NBC news, FOX news and Yahoo!

Listen to the full interview here:

Growing up as a youth I can remember as early as  elementary school,  I have vivid memories of just sitting in class and noticing my stomach churning and getting really sweaty under my armpits. All these things would happen and I didn’t really know what triggered these spiral of symptoms.

I would think I ate something weird at lunch or maybe something’s not sitting right on my stomach or even that I had stomach flu.

My mom figured that I was more sensitive than my sister and needed more attention. I wanted just to be alone.  Going to crowded public places really overwhelmed me.  My parents would say Megan tends to freak before an event happens so they would try to find ways to calm me down.

Are you still wasting time on Non-effective Ads? Grab Howeasyy gift card before the competition eats you alive.

Benefit #2: Instantly increase your rankings and target more than 500,000 people around the world.

Benefit #3: Get Access to the special Limited Time Offer – A 13 in one Platform.

It wasn’t until I was 13 years old in eighth grade about to graduate to go to high school, that I became aware of my emotions and become in tune with my body.  These, anxiety attacks, were really scary and they came out of nowhere.

I would be sitting in a classroom and I felt like I was like coming out of my skin.  Just wanting to get up and go the bathroom and just breathe. Freaking out, I  like didn’t want to be around people,  I just wanted to just have a moment for myself.

Myrna – Do you think you are in introvert? Did you put a label on it?

Megan – I’m actually the most social extroverted person ever. I thrive off of being around people and I love having a big friend group and I love hanging out with people, so I wouldn’t say I’m an introvert, I would say I’m have high functioning, anxiety.

Tim Trilioni is a New Orleans Native who’s grown up literally most of his life around all genres
and music forms. He fell in love with Jazz music from a young age performing at local jazz
clubs, churches and events. As an artist, Tim Trilioni does not feel artists should put boundaries
on their musical expression and it shows in his work. He loves Afro Beats and Kwaito. He is
currently discussing potential collaborations with artists from these genres in the near future.

Teenagers,  can go one of two ways with Anxiety and Depression :

Now that I’m 24, I don’t really get the, anxiety attacks, but I still have anxious moments.

I learned how to handle it though.  I know how to stop the negative thoughts before they turn into a full-blown, anxiety attack.

My, anxiety, continued into high school. I remember so well gearing up during the summer and counting down the days until my first day of high school.  I had the normal thoughts of you know, where’s my locker. What if I get lost in this new school. The what if thoughts would fuel my, anxiety.

How to Control your Anxiety by being in the moment.

Now I know I should have stayed in the present moment, my mind was trying to anticipate what’s gonna happen two months from now, one month, 3 weeks etc.  But the truth of the matter is we can’t control the future.

With, anxiety, you have such a fear of losing control. For people with, anxiety, being in control is what they want.

My, anxiety, has manifested itself in different ways throughout my life.  When I was younger in high school, my, anxiety, manifested in an eating disorder. I was too anxious to eat in school, so I would starve myself all day and then binge at night.

My, anxiety, showed up where my mind would just black out. I would feel  like I got shot off into space and then I would get hot and sweaty and see stars.  It was so scary and  so uncomfortable in public.

Anxiety, can mimic a heart attack or a stroke or it can mimic other life-threatening health conditions.

My freshman sophomore year of high school I was a mess, in constant, anxiety, mode. My mind would calculate that an episode happened at 9 00 a.m. in English class, so then the next day my body, that internal clock started saying it’s 9 a.m.  Yesterday I got an, anxiety attack, so I would have another, anxiety attack, thinking about the last, anxiety attack. It was a vicious cycle. I got so deep in the ditch I felt like a prisoner to my own mind.

As a boxer for over 20 years, I have been Helping athletes and fighters reach their ultimate conditioning with 6 pack Abs and a low body fat index. As a fitness coach and the winner of several championships, I know the role nutrition plays getting that ultimate body.

Fight Club Nutrition a black owned company has put together a catalog of nutritional supplements to bring out the best fitness body.  Try our Iron Body Fat burner or the Alpha Wolf to increase testosterone.

Ladies you should definitely buy this for your man.

Head over to www.fightclubnutrition.com for the best nutritional supplements for athletes.

How did you Heal Yourself of, Anxiety?

My, anxiety, had reached a point where I felt like I was being cornered in a wall, so I had to ask for help.  I sat my parents down and told them what had been going on with me for years. They told me that, mental illness, and, anxiety,  runs on my dad’s side of the family and what I have it’s called, anticipatory anxiety.

They scheduled me in therapy and told me your first session is next week.

Forms of Therapy for, Anxiety.

I am such an advocate for therapy. I think everyone who suffers from, anxiety, should do therapy because every single person on this planet has their own stuff.  It doesn’t have to have been something traumatic; but every person has baggage.

My therapist in high school told me “Megan everyone in life has baggage.” Just like people getting on a plane, some just have a little carry-on while some  have like four suitcases.  Some people have designer baggage, others have a trash bag; but everyone has something to bring on the plane.

What made you become a, Mental Health Advocate, talking in Middle and High Schools?

My therapist also taught me your mind is like a dog on a leash. When you walk your dog outside and you let the dog do its thing while on the leash. The dog just want to take off; but you have to maintain control of the dog on the leash. You mind is the same way, it wants to take off and anticipate everything and then get, anxiety attacks, but you have to reign it back in.  You are still in control of the leash.

When I talk in schools, I try to teach teenagers that they are in control of their minds.

Why do you think there is an epidemic of teenagers with, Anxiety, and Depression?

Teenagers were always having a problem with, depression, and, anxiety.  A lot of people blame it on the social atmosphere, the social culture.  The culture we live in today it’s so different from the 80s or the 90s even the early 2000s.  A huge switch happened when  social media like Facebook and Myspace took off. Now there’s Tumblr, there’s Twitter, there’s, Tic Tock,  there’s Instagram. It’s insane but it is important to remember social media does the same thing to human beings as, anxiety,  it triggers the fear of missing out.  Oh I didn’t get invited to that party that I see on snap chat,  oh my gosh what’s going on with me, my friends are posing on a yacht with a celebrity, so their life must be better than mine.

Social media it really is a very negative thing and I think it’s important to really be aware of how does it make you feel?Before you go on Instagram versus after you get off Instagram. If you are feeling, anxiety, or, depression, after you go on social media, you should cut back your time on it to like 20 minutes a day instead of scrolling for hours.

Here are some of the signs that your Teenager is Depressed

Since teenagers are often moody, it can be difficult to recognize when your son or daughter has become depressed, and might need help. The thing people tend to notice first is withdrawal, or when the teenager stops doing things she usually likes to do. There might be other changes in her mood, including sadness or irritability. Or in her behavior, including, appetite, energy level, sleep patterns and academic performance. If several of these symptoms are present, be vigilant about the possibility of teen, depression.

This is especially important because by the time family members and other people around a teenager note her lack of interest in most things.  She’s usually been depressed for some time. Depression, is an internalizing disorder, i.e. one that disturbs a patient’s emotional life, rather than an externalizing one, which takes the form of disruptive or problematic behavior. As such, it takes a while not only for others to recognize it but often for the patient herself to realize that her thinking, and emotional responses, are disturbed.

What your main message for teenagers battling with,  Anxiety?

My main message is follow your dreams in life. Once upon a time, it feels like a decade ago, when I went was allowed to speak at schools,  I talked about, mental health, anxiety, and self-care.  I touched on a lot subjects; but the main takeaway was follow your passions.  First fill up your cup, take care of yourself and get to know your body.

How to Heal Your Brokenness