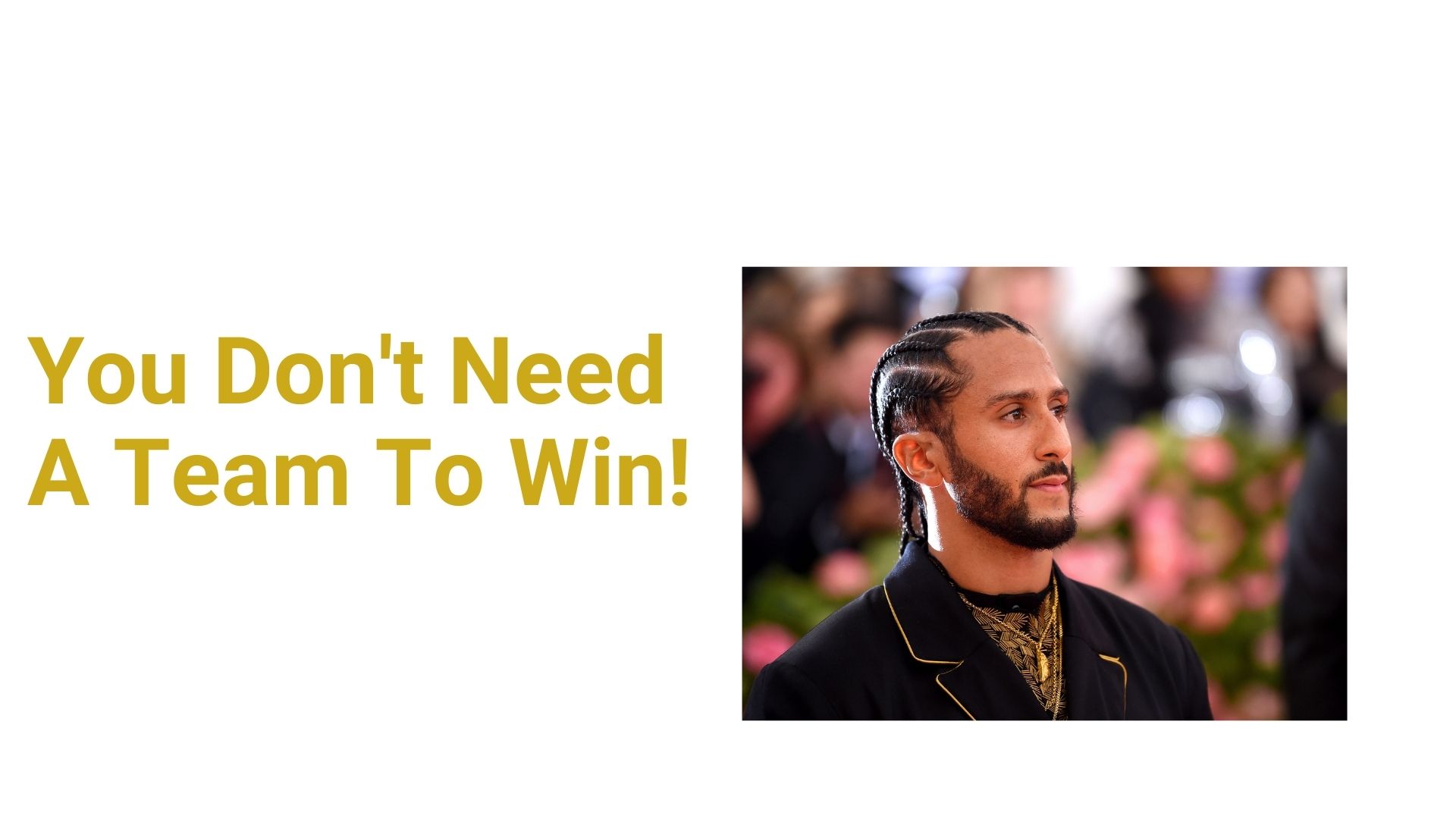 You can win without a, team. Whenever you get out of your comfort zone and go against the masses you will first be ostracized, but that is where personal growth occurs.

Welcome to, 5 mins with coach Myrna.  Today I want to coach on the topic “You Don’t need a, team, to win.”  I am sure you have heard the name, Colin Kaepernick.  He is an NFL quarterback turned, activist. He is bi-racial born to a Black father and White mother. His mother gave him up for adoption at birth and he was adopted by White parents.

Because of this history, he was tired of Black men being brutalized by white officers and decided to take a stand.  His motto ,

“Believe in something. Even if it means sacrificing everything.”

Kaepernick, decided to do something about it. He took a knee to the National Anthem to protest police brutality and racial inequality in the United States while his teammates stood in reverence.

Everyone was in an uproar, President Trump called for him to be fired. When he became a free agent, he was blackballed and no team offered him a job.  But he became an inspiration to other Black men in the NFL and they started taking a knee to the National Anthem.

Today, Kaepernick, has been rewarded the largest contract to date with Nike.  He was given the highest honor from Harvard University the W. E. B. Du Bois Medal and he got a chance to tell his story in a Netflix documentary “Black & White”  about,  Institutional racism.

Institutional racism, is “The collective failure of an organization to provide an appropriate and professional service to people because of their color, culture, or ethnic origin. It can be seen or detected in processes, attitudes and behavior that amount to discrimination through prejudice, ignorance, thoughtlessness, and racist stereotyping which disadvantage minority ethnic people.”

Kaepernick’s victory proves that, You don’t need a, team, to win.

Winning without a team or support

Whenever you get out of your comfort zone and go against the masses you will first be ostracized, but that is where personal growth occurs.

You can’t grow sitting in your comfort zone

Stand up for yourself and take a stand against wrongdoing at work, in your home or on your community. You don’t need a, team, to win you just need God to be on your side.

What I love about the Old Testament is that nobody did anything without consulting God. David, Saul, Samuel, Elijah they all consulted God before they went into battle. We as a collective have lost that communication with God, but if you are doing good then you know God is on your side and he is the only team member you need to win.

Finally, winning without a, team, requires, determination. Teams, need to have the, determination, the grit, and the heart to rise to the occasion and so do you. Nothing is ever going to be easy, the road to holding a trophy or being awarded a top prize is often filled with obstacles that will test every aspect of your character.

It doesn’t matter what the score is or what the final records will read, if you are in the game, you need to give everything you have. It doesn’t matter if you are blackballed like, Colin Kaepernick, you still need to stand up for what you believe is right. This is the mentality that will lead to, winning without a team. Champions recognize that losing and failure are both simply tools that they will use to build success.