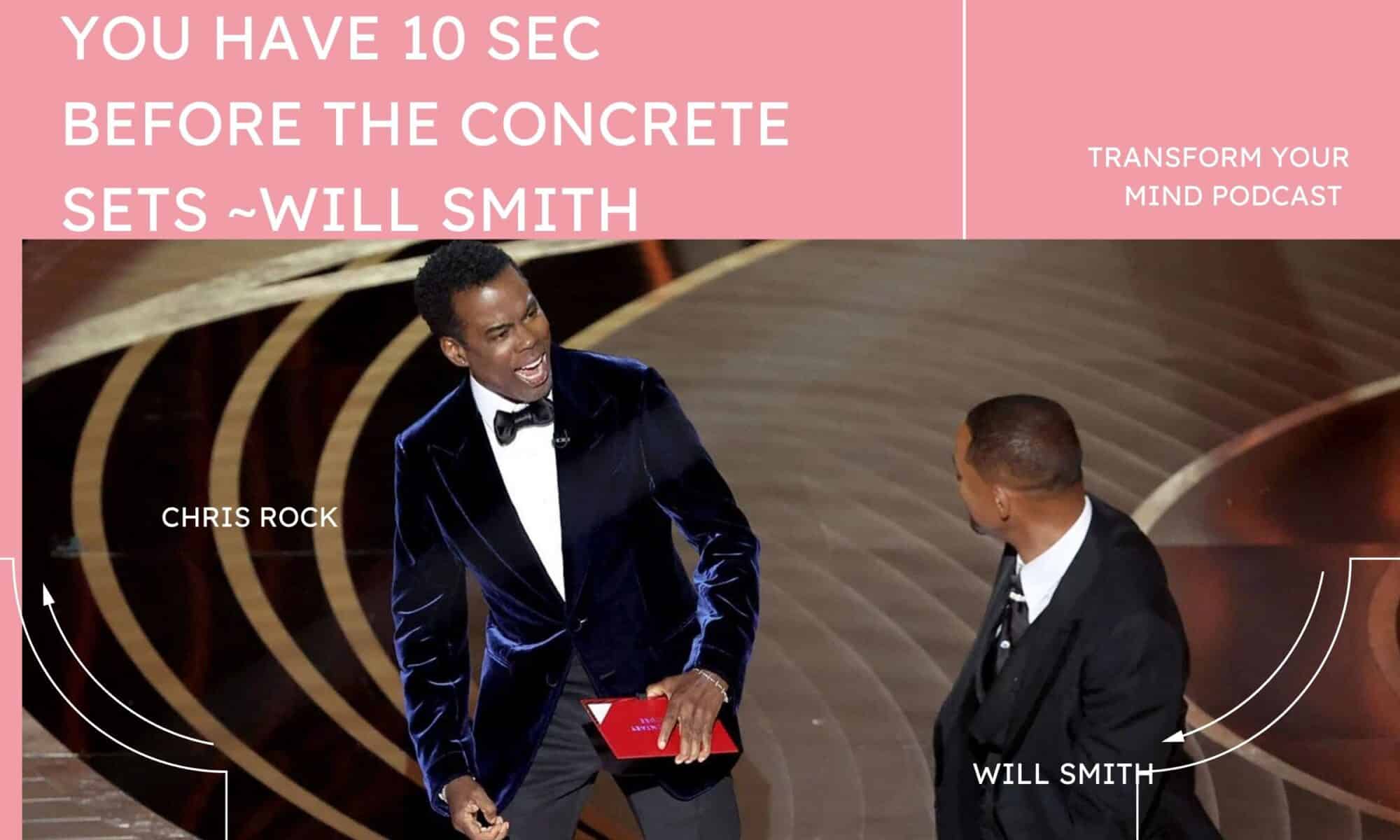 Will Smith, had 10 seconds to choose a different, thought, before the, concrete set, and, reality, hardened when he slapped Chris Rock on national television

I just finished reading Will Smith’s biography “Will”  I really enjoyed reading his book and recommend it to anyone interested in changing their mindset.

There were 3 main quotes from, Will Smith’s, book  that I loved, one of them was “You have 10 seconds until the concrete sets and, reality, hardens.” I think this is a good time to talk about what that really means and reference what happened at the, 94th Oscars, between, Will Smith, and, Chris Rock.

Will Smith’s Biography “Will”

His father’s legacy was also the year that he made, Will Smith, and his brother Harry build a concrete wall so Will learned his concrete, analogy, from personal experience “You have 10 seconds until the, concrete sets, and, reality, hardens.

Will used this analogy when his friend and fellow performer Ready Rock did not come out on stage for his set when he called for him, because he was jealous of Will’s success. He gave him 10 seconds to make a better choice and when he didn’t, reality, set and Will never called for him again.

He used this same concrete, analogy, of, reality, setting, when his girlfriend Melonie was about to go out somewhere and he told her not to go and she walked through the door anyway. The, concreate set, and the, reality, was that it was over. Will Smith, set her clothes on fire and never saw her again.

The Jordan Harbinger Show, is a top shelf podcast named best of Apple in 2018.

Jordan dives into the minds of fascinating people — from athletes, authors and scientists to mobsters, spies and hostage negotiators.

I really think there just isn’t a better podcast to listen to casually or seriously to expand your worldview. Jordan’s also got a strangely relatable weekly segment, “Feedback Friday,” where he covers advice on everything from escaping a cult or psycho family situations to relationships and networking to asking for a raise.

Search for The Jordan Harbinger Show (that’s H-A-R-B-I-N-G-E-R) on Apple Podcasts, Spotify, or wherever you listen to podcasts. You can also head over to jordanharbinger.com/start  to start listening.  Here are 2 episodes I loved and I think you would too.  Check out

The concrete has set and, reality, hardened. Whether you believe, Chris Rock, was wrong to joke about Jada’s bald head, we know it was wrong for, Will Smith, to walk on stage at the, Oscars, and, slap, him.

Will Smith Grew up with Domestic Violence

Will Smith’s father was a bully and he grew up with  domestic violence, seeing his father  slap his wife and kids until his mother eventually left him, and in an out of body experience, Will Smith, became his dad. He got out of his seat and slapped someone because he did not like what he said about his wife.

In his autobiography, published in November 2021, the actor describes at length the appalling, domestic violence, he and his three siblings witnessed his father, Willard, inflict on his mother.

“When I was nine years old, I watched my father punch my mother in the side of the head so hard that she collapsed,” he wrote. “I saw her spit blood. That moment in that bedroom, probably more than any other moment in my life, has defined who I am. I am a, coward”

Will Smith thinks he is a coward

Will Smith, says “Within everything that I have done since then — the awards and accolades, the spotlights and attention, the characters and the laughs — there has been a subtle string of apologies to my mother for my inaction that day. For failing her in the moment. For failing to stand up to my father. For being a, coward.

“What you have come to understand as ‘Will Smith’, the alien-annihilating MC, the bigger-than-life movie star, is largely a construction – a carefully crafted and honed character designed to protect myself. To hide myself from the world. To hide the, coward.”

Training the mind to make a better choice

So how do we make better choices in the 10 seconds before the, concrete sets? You have to, train the mind.  Just like you can’t learn to swim when you are drowning, you can’t make good choices when you are thrown in the fire; unless the, mind, is trained on what to do in the fire and then takes over on autopilot.

Start training your mind to make the right choices because when the, concrete sets, there is no going back, reality, becomes permanent.

When you feel that rage bubbling up inside you, choose a better, thought.  Count to 10 and breathe because the devil is driving around looking for people to destroy. The prison is full of both men and women who had 10 seconds to choose and made the wrong choice.

What would have happened if Will Smith chose a better thought

Can you recognize your failure symptoms?

My guest today shares her story of years of, domestic violence, she was verbally and physically abused by her parents and then continued the cycle into abusive relationships, one of them almost killing her. After her last abusive relationship ended, she discovered that he was sexually molesting her 7 year old daughter. Shermomicia tells a powerful story of how she is stopping the cycle of, domestic violence, and healing her family.

Shermonicia tell me your back story. I know you’re studying for your masters right
now but can you take us through your journey to this point in your life.
I have three sisters and one brother. The four of us growing up with my mother and father they were both on drugs. My whole entire life was abusive. I am also a victim of sexual molestation. I was sexually attacked when I was like seven or eight. It was hard growing up with both parents on drugs. I have three kids with 3 different men who were all abusive.
I’m going to talk about the abuse today is where the abuse that almost cost me my life

I would say that my abuse started way before I even got with any man. My mother was very verbally and physically abusive. Every day she would tell me how she wished she never had us.
She called us all kind of names so, I didn’t have no self-esteem, none whatsoever. My father was abusive as well, he would abuse my mom. It led me to abusive men. I got married to my son’s dad and he was verbally abusive. He left me and my son with no money and we got evicted. I lost my job because of him and we’d had nowhere to go, so my mother decided I guess you can come stay with me. So I lived with her for a little while and I was able to get back on my own feet to get my own place. I met my oldest daughter father 2 years after my divorce. We got together and I had his child seven months after we met. Four months after she was born, the abuse and , domestic violence, started. It lasted for four years. I was physically beaten not daily, maybe every other day. He was a monster. He really was. I have been kicked in my head, I have been punched and choked and slapped; brought up against walls dragged, through the house by my hair. He locked me in a closet, he used belts. I didn’t want to sleep with him, two times he knocked me unconscious and he got so scared because he thought he killed me.
Wow, domestic violence, is no joke. It is hard for me to write this.

Shermonicia let’s talk about what happened in the third, domestic violence, relationship.

I met him in 2013 and right away we started a sexual relationship. He was always saying I
don’t want a girlfriend, I just want to have have fun. I got pregnant seven months after meeting him. So here I am, a third child by a third man. He used God to get in the door. He said God told me you’re going to be my wife and he just he moved in. For the first 3-4 months the relationship was wonderful. He’s was a, narcissist who used sex to control, He was very sexual he used sex with everything that he does, so after 4 months the verbal and mental abuse started. The pattern of, domestic violence, started again. He’d push me against the wall, he’d put his hands on me, but it wasn’t like the first, domestic violence, relationship I was in. He propose and we were planning our wedding and fifty
days before the wedding he called it off. He jumped on me in front of my children and walked out. About a month after he left he left, my seven-year-old daughter came to me and said he put grease between my legs. That kind of caught me off guard and when I went to him and asked him about it and he said she was hurting down there so I put grease.
My daughter would not talk about it until I took her to a church group, the lady was sharing about how her father molested her and she broke down and told me all what her was doing to her. It was almost like a second heartbreak to me because I was dealing with a breakup. We had a four year old child together, I was going to marry this man. It was devastating and so I
immediately contacted the authorities and you know got everything going. The trial starts in a couple of weeks.

Tune in to listen to this incredible story of survival and how Shermomicia is making sure that the cycle does not continue to her daughters.